Exploring The Canyon And Learning More About Desert Bighorn Sheep 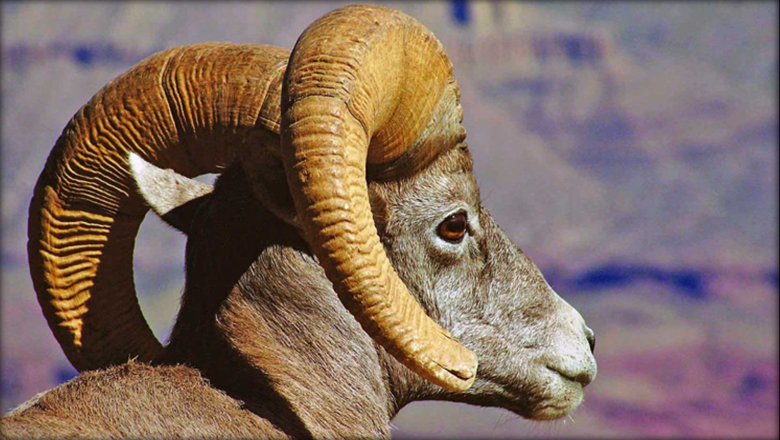 Scientists have found evidence that desert bighorn sheep existed in ancient times. Small sculptures of the animals have been found inside caves in the Grand Canyon. These canyon animals, which display a muscular body and white-furred muzzles, rumps, and bellies feature notable horns.

The male of the species, or rams, show off curved and big horns while the females or ewes display short horns that are slightly curved. The largest of the indigenous canyon animals, bighorn rams can weigh as much as 250 pounds or 113 kilograms.

When visiting the South Rim or West Rim of the canyon, you normally see these animals on steep sandstone cliffs. Desert bighorn sheep call the Sonoran Desert, Grand Canyon, and Mojave Desert home in the U.S. Southwest. Therefore, the spotting of this iconic animal makes a trip to the Grand Canyon an exciting event.

As their name suggests, desert bighorn sheep adapt well to desert climates and can go for long periods without drinking winter. These socialized animals gather into herds of about 10 sheep. However, herds in the Grand Canyon, along the Colorado River, may contain twice that amount.

A Decline in the Population

As you might guess, the males, or rams, dominate herd activities, charging at one another until one of the retreats. Of all the Grand Canyon wildlife, desert bighorn sheep stand in a visitor’s memory. However, in recent years, the population of bighorn sheep has steadily declined, due, according to scientists, to changes in the climate.

Variables in the climate, such as increasing temperatures and reduced rainfall, affect the availability of food or dependable water sources. While the sheep can go for a long time without water, ewes still need water every day while they are lactating.

Fortunately, members of the national park system in coordination with other interested parties use standardized testing to assess the impact of climate change and to check the habitats and herds.

The Grand Canyon features an ideal habitat for desert bighorn sheep, given its rocky and steep terrain. The sheep like to zigzag up one side of a cliff face and can adroitly take hold of ledges a mere two inches wide. They can run as fast as 30 miles per hour over a level landscape and scramble up inclines at half that speed. Their sharp-edge, concave, and elastic cloven hoofs serve them well when navigating the rocky terrain.

If you visit the Grand Canyon, you may see one of these majestic animals. While you can view pictures of bighorn sheep online, seeing them up-close and for real is much more satisfying. According to the National Park Service, the desert bighorn sheep in Grand Canyon National Park play a big role in U.S. Southwest conservation. While hunting, transplantation, or grazing do not occur inside the park, these activities do happen on park boundaries, thereby impacting the population.

Protect and Respect the Environment

Evidence also shows that some sheep ingest food wrappers and related materials left by hikers or people rafting the river. The consumption of these materials affects populations by having an adverse effect on the animals’ digestive tracts.

Remember to respect the animals in the park when you plan a visit.